The lead up to Christmas is always a flurry of shopping, social events and school-break-up activities. But Last Monday December 15, Sydney stood still and held it’s breath.

What I thought and felt over the next 24 hours as the Sydney siege unfolded and came to it’s brutal conclusion has been echoed in countless blogs, websites and newspapers.

By last Tuesday evening I couldn’t listen to the news coverage anymore. But I realised that as bad as I felt, it would never begin to compare to the feelings of the families and friends of the victims, barrister and mother-of-three, Katrina Dawson, and Lindt Café manager Tori Johnson, the surviving hostages, and to those who were actually in Martin Place that day. I took two Panadol and told my sick headache and my nerves to “suck it up, princess”.

But Mr Baird said the families and survivors must know they are “not alone – there are millions of people across this state and country that are saying to you ‘we are right beside you’.” The many notes accompanying the thousands of floral tributes will be bound and given to the grieving families. No, it won’t bring them back, but it’s something, just to know that other people are thinking of you and your loved one who has gone.

The Sydney I know and love is generally a harmonious city, buzzing with the energy of hard-working people trying to live a good life. That’s why we were so shaken by the terror that penetrated Martin Place, a major artery of the lifeforce of this magnificent city, on an ordinary Monday morning in December. A morning coffee is so relatable, so ordinary – it could have been any one of us.

Thousands of people from all over Sydney have visited Martin Place in the past week. Premier Baird told the 7.30 program, “It’s just so beautiful down there – it’s the people, it’s the stories, it’s the families. Complete strangers, hugging in tears, putting down the flowers, reflecting on the loss, the thankfulness in some respects of the hostages that are still with us, and an overall sense in this city we will get through this.”

Journalist and former Foreign Affairs staffer Tim Mayfield writes on the Drum website that far from dividing us, this event has brought us together. Tim writes about the best way to honour the victims.  “As we mourn for the victims of this attack and their families, let us ensure that December 15 comes to be known as the day that Australia was changed for the better. The day that we chose to demonstrate to the world, and especially those that would seek to do us harm, that we are a confident, positive, outward looking people who refuse to be turned against each other in the face of adversity.”

I heard US writer and inspirational speaker Mastin Kipp speaking in Sydney last week. His book Daily Love: Growing into Grace speaks about the pain of being human and how trauma can be turned into power, through grace, that higher power that shines from within us all – we just have to find it. He spoke of visiting Martin Place when he first arrived in Sydney and seeing all the flowers, the people, and how the overriding feeling there was one of love.

Sydney has shown grace in the aftermath, illustrating community spirit and harmony, with the embracing of #illridewithyou on social media. There has also been mateship, with complete strangers offering hugs to console strangers in Martin Place. This rainbow after the storm is Sydney at it’s best.

For the families and friends of the victims, especially the three children who will grow up without their mother, they have the compassion of a whole city. But they would rather just have their loved ones back. Whatever rainbows may emerge for the families of Katrina Dawson and Tori Johnson, this event has changed the course of their lives forever, and for the children, changed who they will become. But maybe in some small way, it will help that we remember them. The family of Katrina Dawson has said that as well as support from family and friends, “…we also feel that we have been surrounded by the warmth of a city and a nation…”

Katrina Dawson’s family has established the Katrina Dawson Foundation in her honour. It will focus on the education of women, something that was very important to her. As the Foundation’s mission statement says, “… it is our hope that out of her (Katrina’s) senseless death we will, through the opportunities the Foundation will provide, bring meaning to the lives of other amazing young women.”

Tori Johnson’s family, has also set up a website in his honour, the Tori Johnson Memorial Fund, with contributions going to Beyond Blue. A statement on the website says Tori always believed in helping others and taking a positive approach, so his family felt that Beyond Blue was a fantastic cause to support in Tori’s name.

Last Saturday evening’s Carols in the Domain was another opportunity to feel some community spirit. In a statement issued before the event, executive producer Michael Mackay, counted the Carols event amongst interfaith prayer services in Sydney and social media support as another way to bring our community together.  Mr.Mackay said of the event, attended by Premier Baird and Lindt Café staff members, “We see this as our most important Carols in the Domain ever”.

Sydney did indeed bring it’s compassion to Carols in the Domain. Over 80,000 candles were held in the air as a tribute to Katrina Dawson and Tori Johnson, for the first song of the evening, You Raise Me Up. We stood united in compassion. Let’s never forget the grace Sydney has shown at this time. 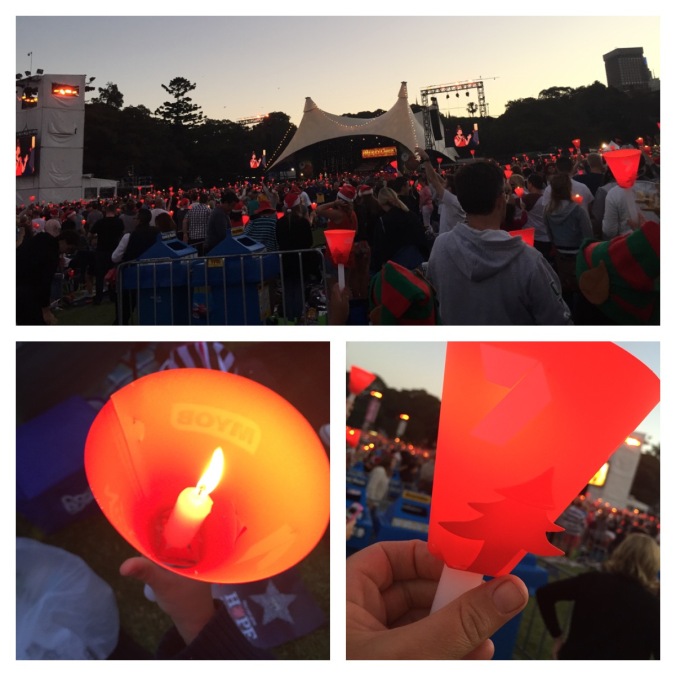 Wishing everyone a peaceful Christmas.