My sister, Senorita Margarita, has just returned from Mexico and has fallen in love with its cultural traditions. There were no Jennifer Aniston-style antics by the pool in Cabo. No, Margarita’s journey was more spiritual. She did a tour of Mexican villages with middle-aged achaeologist-type people and took part in a traditional Day of the Dead ceremony. The Day of the Dead is a yearly festival where people pray for and commemorate friends and family members who have died.

So when Margarita stumbled upon El Topo, a new Mexican restaurant in Sydney recently, she knew it was the perfect venue to celebrate her birthday, a la Mexicana. Margarita also happened upon a makeup artist at a local makeup store who knew how to do Day of the Dead-style makeup. Margarita’s face was painted to resemble a skull, a symbol of the Day of the Dead.

Strike a pose Day of the Dead style. Check out the skeleton-back chairs!

El Topo’s decor is colourful and, from the perspective of someone who’s never been to Mexico (except for that four hours in Tiajuana in 1992), very authentic. I walked in there and felt I was escaping to a Mexican holiday destination. Or at least, escaping Westfield. (Yes, it can be accessed from Westfield Bondi Junction).  It has an exceptional outdoor terrace area with a private dining room (where my sister’s party was). There are also cosy booths, each one decorated with different Mexican-style themes, from traditional Day of the Dead skulls, to religious iconography, to pictures of guitar-strumming, movie star-style senoritas. 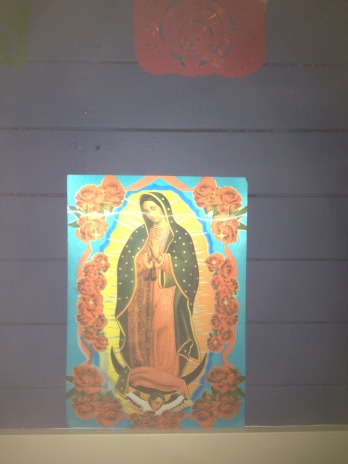 Margarita displayed this poster of Our Lady of Guadalupe 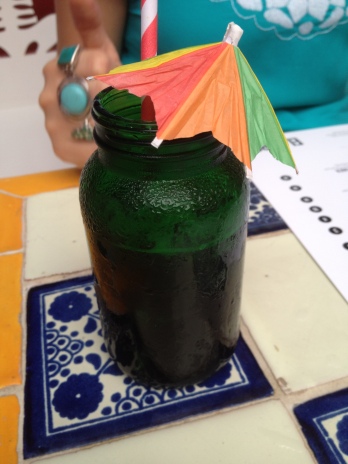 An El Topo cocktail – hibiscus, lime juice and rose (it was “el Topo”)

The food was unlike no other Mexican I’ve ever had – it was authentically Oaxacan (Wahacan). There was not a Dorito in sight –  yes, it was a Nachos-free zone. While there are fried crickets (the insect) on the menu, there are so many other delicious items for the not-so adventurous diner (that’s me).

Senorita Margarita had told me she’d eaten fried grasshopers in Mexico and crickets were on the menu here. I warned her before we went, “I’m NOT eating grasshopers! But I will try the Mole”, I said, pronouncing it “Moll”.

When Senorita Margarita first returned from Mexico, she brought over a bottle of what look like chocolate sauce. “Mole” read the label.  “What’s this Mole?” I asked, pronouncing it “Moll”.

“Mol – ay” she corrected.  Mole is a Mexican sauce containing chocolate, chili and other spices.

“What’s this Mole”? said my dinner table neighbour as she perused the menu, pronouncing it “Moll”. Some people, honestly!

I later tried some of the famous “Mol – ay” from my neighbour’s plate of “Pollo en Mole Negro y Garbanzo” (chicken maryland, mole and chickpea) and we agreed it was like “a party in the mouth”, with about five different flavours at once, like a spicy tomato chocolate sauce. On chicken. Quite amazing. 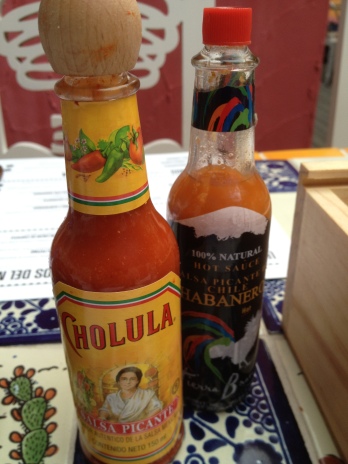 Not Mole. Hot stuff though.

I ordered a Quesadilla or “Queso y Flor De Calabaza” which was four folded-over triangles of burrito with a Oaxacan cheese, quinoa, salsa vierge and zuchini flowers. It was delicious,  with the delicate flavours of the zuchini flowers and the salsa. It was tasty, satisfying and at $13 a great price for a meal. Wish I’d photographed the quesadilla, but was too busy eating and talking. But here’s a shot of dessert. Mmmm… donuts. 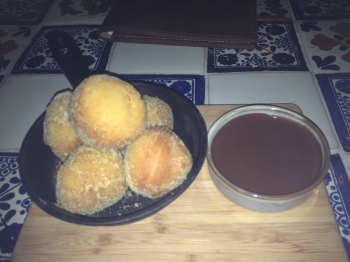 These donuts were made for dunkin’

The dessert menu is amazing, and I had trouble choosing between the “Flan Roto de Coco con Chocolate y Cajeta” (smashed flan of coconut, single origin Mexican chocolate, hazelnut and goats milk caramel) and the “Bunuelos con Chocolate” (donuts and chocolate sauce). I chose the donuts, and despite my eagerness to dunk the hot, crispy, sugary goodness into the melted Mexican chocolate (which was NOT Mole), I managed to photograph my plate first (because I had to wait for the donuts to cool down).

El Topo is located on the rooftop (level 3) of the Eastern Hotel, 500 Oxford Street, Bondi Junction, and remember, can also be accessed via Westfield!

So, Senorita Margarita, Feliz Cumpleanos! May it be a wonderful year for you.